I distinctly remember the first time I met Maltease Kris. I was in the Anchor pub in Cambridge, bonding with some new friends. I’d heard a lot about him already, and I certainly heard him before I saw him. It was definitely ‘start as you mean to go on’, as we proceeded to spend a good chunk of the next three years in various public houses around that small town, rather than devoting ourselves to our studies…. I’d like to say we’re more sensible these days, but I suspect we’re just old. And more inclined to go running.

I’m not sure what took me so long, but I finally visited my favourite Malteaser for the Malta Half Marathon in 2013, with Doddski in tow. This dose of winter sun has become something of a tradition, and missing last year (due to more extensive adventures) made us all the more eager for this year’s jaunt. It’s cheap, it’s usually sunny and, while Kris laments the mildly shambolic organisation of the race itself, we find it nothing short of charming. Various husbands and friends have joined in along the way, whether to run or simply to soak up the mediterranean atmosphere. Oh and to eat the pizza and drink the wine, obvs.

Running fast with Kris in 2015

First trip with Doddski in 2013 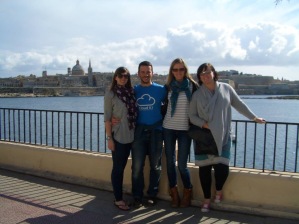 Things didn’t go quite to plan this year, however. Kris had been sending alarming weather predictions all week. We packed our cagoules. And as we approached Malta, the pilot informed us it ‘might be a bit bumpy’ as we landed in the early part of Malta’s worst storm in years. We’d left the UK in the midst of its warmest ever February, and landed in 4 degrees and driving rain in the middle of the Med. The poor little rock was really taking a battering, with angry seas, trees blocking roads and widespread damage to buildings. Not quite what we had in mind and, surprise surprise, the race was cancelled!

TBH, Doddski and I weren’t that disappointed as it did look borderline biblical, and I’m pretty sure the husbands were relieved they didn’t have to go out in it to cheer us over the line. And Kris still held his post-marathon party, including the famous Maltese pastizzi, which was the main thing after all 😉

The weather subsequently cheered up on Monday, so we donned our race t-shirts and went out for a 13.1 mile run, encountering many of the other ‘disappointed’ non-participants. Who were full of smiles and waves, which suggested they were also happy enough with the organisers’ decision. While we didn’t have the usual race-side entertainment from every band in Malta, or the cheers from the uniformed Scouts who staff the drinks stations, it was a pretty good substitute. And we picked up our medals en route, too cool.

The sun came out for Tuesday and Wednesday, so we managed to soak up some rays while enjoying some of Malta’s finer points. I mean the surroundings really (Valletta and the Three Cities really are lovely) but we did indulge ourselves in sunny alfresco drinking and dining as a bonus. It would be rude not to. 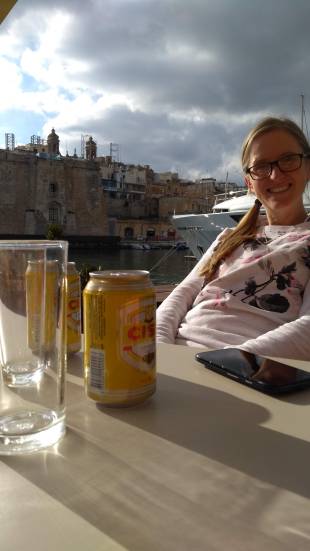 And all too quickly it’s over, and we’re back to reality! Lovely muddy parkrun at Killerton for me yesterday, followed by some hills and storm Freya today…. And then it’s the Grizzly A WEEK TODAY. How has that happened?? I definitely don’t feel ready, but you never do, right?!

Aside: I didn’t really eat any cake in Malta (no space after all the pizza) but I did make this rather delicious pudding when my friend Emilie came for dinner last week. Highly recommended. And it contains apples so it must be healthy 🙂